JUDY WOODRUFF: Detroit is home to an unusual museum that draws on African history and customs, including a city block filled with installations and sculptures. It also allows visitors hands-on experiences and is a stabilizing force in the city. Special correspondent Mary Ellen Geist reports, as part of our ongoing arts and culture series, Canvas.

MARY ELLEN GEIST: The museum is located in one of Detroit's most distressed neighborhoods, and for two decades has provided something else that was missing, stability. It has expanded to include a bead gallery and 18 outdoor sculptures covering an entire city block.

OLAYAMI DABLS: I decided to take the relationship between Africans and Europeans over a 500-year period of time and put them in storylines. And, to my surprise, the community was elated over this and said, oh, man, this is nice. The best indicator that we have been accepted by the community, this place is out in the open. You can access it 24/7. Anyone can come. If people wanted to destroy it, they could destroy it in one day, years of work.

MAURICE COX, Former Director, Detroit Planning and Development Department: Artists have a very special superpower to take the ordinary and turn it into something extraordinary. The area that Dabls adopted was an area that was devastated and had gone through trauma. He found a way to tell that story, but also to find some joy in the retelling of the story.

MARY ELLEN GEIST: In telling the story of his neighborhood, Dabls has inspired Detroit officials to rethink how to structure the city's recovery. 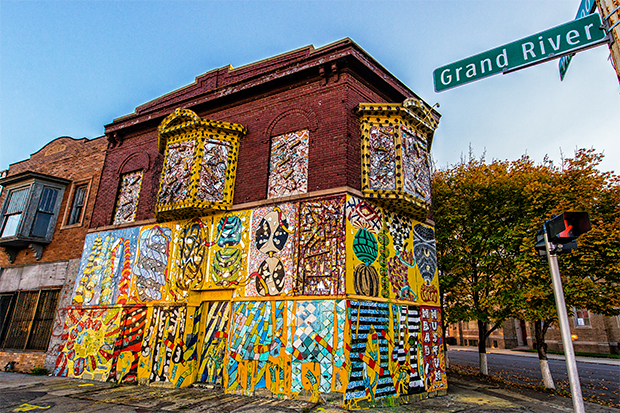 MAURICE COX: He's begun to show us how the city can recover in increments. His Bead Museum is a building that, in one part, it's completely ornate and it's been transformed. But then you go to another portion of it, and the roof is caved in and it's waiting for investment. He's said, oh, OK, here's a way that you can incrementally go about stabilizing an area or a building that wasn't.
That's a brand-new way of creating an institution. That's not normally how we do it.

OLAYAMI DABLS: This is not a traditional museum. This is a museum for exposure to connect with what's inside of you. The community engages with us on their own terms.

MARY ELLEN GEIST: Dabls has continued to engage the surrounding community by starting an internship program. Over time, the surrounding neighborhood may change, but Dabls says the guiding principle behind his work and the MBAD African Bead Museum will not.