Marijuana Use Rising Among US College Students
The college years in the United States are a time for students to experiment. Many U.S. colleges and universities urge their students to explore a variety of ideas, interests and even ways of thinking that may be different or new to them.
Most Americans who go to college usually do so right after high school, when they are away from home for the first time. John Schulenberg believes that because of this separation from family members, some of the experimentation done on college campuses is not healthy.
Schulenberg is a research professor at the Institute for Social Research at the University of Michigan. He notes that for years, drug and alcohol use by students has been a big issue at U.S. colleges and universities.
Many movies and television shows present drug and alcohol use as just a normal part of the college experience. Yet Schulenberg told VOA that it has a lasting effect on students' overall well-being.
"The fact is the brain is still growing … through the mid-20s," he said.
That is why Schulenberg is concerned about evidence of increasing use of the drug marijuana at U.S. colleges and universities. In July, he and a team of researchers published a study. It found that in 2018, marijuana use among college-aged Americans reached the highest level since 1983.
The researchers examined the behavior of about 1,500 young people, between the ages of 18 and 22, after their final year of high school. Almost 1,000 of these men and women were admitted to a college or university, while the rest were not. The study found that about 43 percent of those questioned reported using marijuana sometime during the past year. About 25 percent reported using it sometime within the past month.
Earlier research has suggested links between heavy marijuana use and poor academic performance and mental health issues. But Schulenberg worries more about another finding of the new study. It shows that the number of people vaping marijuana doubled between 2017 and 2018. They use an electronic device, such as an e-cigarette, to combine water vapor with marijuana. The vapor contains tetrahydrocannabinol, or THC, a chemical found naturally in the cannabis plant.
Schulenberg says he has never before seen any form of drug use double in just one year.
The New York Times reports that vaping has been tied to nearly 800 cases of lung disease and at least 14 deaths nationwide. The newspaper also reported that police have arrested producers of thousands of illegal THC-vaping devices in three states. 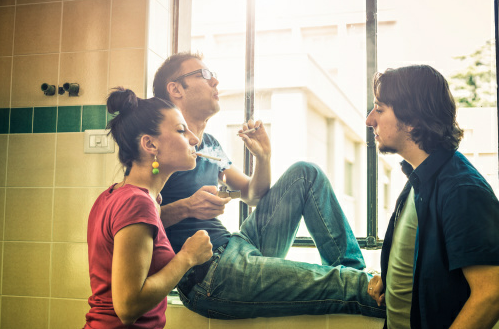 Delynne Wilcox says there are several reasons why both marijuana use, in general, and vaping are on the rise among young people. She is co-chair of the Alcohol, Tobacco and Other Drugs Coalition for the American College Health Association.
For one thing, she says, a growing number of states have eased their rules banning marijuana use. This has resulted, in part, from efforts of the marijuana industry to spread the belief that the drug has medical uses.
The immediate intoxicating effect of alcohol, as well as the dangers of its overuse, are also clearer than that of marijuana, Wilcox says. So many young people believe that using marijuana is safer than drinking beer or other forms of alcohol.
Schulenberg agrees that more people see marijuana as safe to use. He noted that in 2018, only 22 percent of 19 to 22-year-olds said using marijuana can be harmful, either physically or psychologically. In 1995, 75 percent of young people felt that way. And some researchers are looking at ways in which marijuana may help people who are dependent on other, more dangerous drugs.
However, both Schulenberg and Wilcox agree that the science supporting these claims is lacking, as marijuana remains illegal on the national level. So the study of both its possible helpful and harmful qualities is greatly limited.
Wilcox adds that young people are less concerned about the health effects of vaping for the same reasons they are less concerned about marijuana. Some companies have advertised vaporized nicotine products as a healthy alternative to smoking traditional cigarettes. They also offer products that taste like fruit or create a pleasant smell.
But Wilcox argues there is hope for the fight to reduce these unhealthy behaviors at U.S. colleges and universities. She says research shows that school policies barring use of drugs and alcohol have been successful. And when it comes to alcohol, heavy drinking among college students has been decreasing in recent years. So there are signs students are more interested in healthy living.
School officials need to strengthen their enforcement of rules governing marijuana and other substances, says Wilcox. They should also seek ways to limit the availability of such drugs, even if they are legal in the surrounding community.
Supporting healthy behavior is also important. Colleges and universities should offer more non-academic activities that are substance-free. The same goes for creating systems that can identify students who might be at risk of substance abuse and offering to help them.
"The longer we can delay the use the better off we're going to be as a society," said Wilcox.
I'm Kelly Jean Kelly. And I'm Pete Musto.