I was going to town one morning when my wife gave me a little piece of red calico cloth. She asked me if I would have time, during the day, to buy her two and a half meters of calico cloth like that. I told her that it would be no trouble at all. Putting the piece of brightly colored cloth in my pocket, I took the train to the city. During the day, I stopped in at a large store. I saw a man walking the floor and asked him where I could see some red calico. "This way, sir." And he led me up the store. "Miss Stone," said he to a young woman, "show this gentleman some red calico." "What kind of red do you want?" asked Miss Stone. I showed her the little piece of calico cloth that my wife had given me. She looked at it and gave it back to me. Then she took down a great roll of cloth and spread it out on the counter. "Why, that isn't the right kind of red!" said I. "No, not exactly," said she; "but it looks nicer than your sample." "That may be," said I, "but, you see, I want it to look like this piece. There is something already made of this kind of calico which needs to be enlarged or fixed or something. I want some calico of the same shade."
The girl made no answer, but took down another roll of cloth. "That's the right color," said she. "Yes," I answered, "but it is striped." "Stripes are worn more than anything else in calicoes," said she. "Yes, but this isn't to be worn," I said. "It's for a piece of furniture, I think. At any rate, I want perfectly plain material, to go with something already in use." "Well, I don't think you can find it perfectly plain unless you get Turkey red," she said. "What is Turkey red?" I asked. "Turkey red is perfectly plain in calicoes," she answered. "Well, let me see some." "We haven't any Turkey red calico left," she said, "but we have some very nice plain calicoes in other colors." "I don't want any other color. I want cloth to go with this." "It's hard to find low-cost calico like that," she said. And so I left her. I next went into a store a few doors up the street. I gave a salesman my sample, and asked:"Have you any calico like this?" "Yes, sir," said he. "Third counter to the right." I went to the third counter to the right. A man there looked at my sample on both sides. Then he said: "We haven't any of this." "I was told you had," said I. "We had it, but we're out of it now. You'll get that from an upholsterer, someone who recovers furniture."
I went across the street to the upholsterer's store. "Have you anything like this?" I asked. "No," said the man, "we haven't. Is it for furniture?" "Yes," I answered. "Then Turkey red is what you want." "Is Turkey red just like this?" I asked. "No," said he, "but it's much better." "That makes no difference to me," I said. "I want something just like this." "But they don't use that for furniture," he said. "I should think people could use anything they wanted for furniture," I said, somewhat sharply. "They can, but they don't," he said, calmly. "They don't use red like that. They use Turkey red." I said no more, but left. The next place I visited was a very large store. Of the first salesman I saw, I asked if they sold red calico like my sample. "You'll find that on the second floor," said he. I went up the steps. There I asked a man: "Where will I find red calico?" "In the far room to the left. Over there." And he pointed to a distant corner. I walked through the crowds of purchasers and salespeople, and around the counters and tables filled with goods, to the far room to the left. When I got there I asked for red calico. "The second counter down this side," said the man. I went there and produced my sample. "Calicoes are downstairs," said the man. "They told me they were up here," I said. "Not these plain goods. You'll find them downstairs at the back of the store, over on that side." 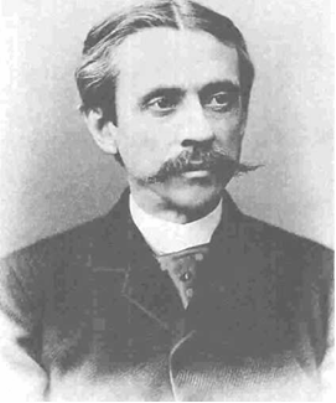 I went downstairs to the back of the store. "Where will I find red calico like this?" I asked. "Next counter but one," said the man, walking with me in the direction he pointed out. "Dunn, show this man red calicoes." Mr. Dunn took my sample and looked at it. "We haven't this shade in that quality of goods," he said. "Well, do you have it in any quality of goods?" I asked. "Yes; we've got it finer." And he took down a piece of calico, and unrolled a meter or two of it on the counter. "That's not this shade," I said. "No," said he. "It is finer and the color is better." "I want it to match this," I said. "I thought you didn't care about the match," said the salesman. "You said you didn't care for the quality of the goods. You know you can't match goods unless you take into consideration quality and color both. If you want that quality of goods in red, you ought to get Turkey red." I did not think it necessary to answer this comment, but said: "Then you've got nothing like this?" "No, sir. But perhaps they may have it in the upholstery department on the sixth floor." So I got in the elevator and went to the sixth floor. "Have you any red material like this?" I said to a young man. "Red material? Upholstery department -- other end of this floor." I went to the other end of the floor. "I want some red calico," I said to a man. "Furniture goods?" he asked. "Yes," said I. "Fourth counter to the left." I went to the fourth counter to the left, and showed my sample to a salesman. He looked at it, and said, "You'll get this down on the first floor -- calico department."
I went down in the elevator, and out on the street. I was completely sick of red calico. But I decided to make one more effort. My wife had bought her red calico not long before, and there must be some to be had somewhere. I should have asked her where she got it. But I thought a simple little thing like that could be bought anywhere. I went into another large store. As I entered the door, a sudden nervousness took hold of me. I just could not take out that piece of red calico again. If I had had any other kind of a cloth, I think I would have asked them if they could match that. But I stepped up to a young woman and presented my sample, with the usual question. "Back room, counter on the left," she said. I went there. "Have you any red calico like this?" I asked the saleswoman. "No, sir," she said, "but we have it in Turkey red." Turkey red again! I surrendered. "All right," I said, "give me Turkey red." "How much, sir?" she asked. "I don't know -- say fifteen meters." She looked at me strangely, but measured off fifteen meters of Turkey red calico. Then she touched the counter and called out, "Cash!"
A young girl with yellow hair appeared. The woman wrote the number of meters, the name of the goods, her own number, the price, and the amount of money I gave her, on a piece of paper. She probably wrote some other things, like the color of my eyes and the direction and speed of the wind. She then copied all this into a little book. Then she gave the piece of paper, the money, and the Turkey red cloth to the yellow-haired girl. This girl copied the information into a little book she carried. Then she went away with the calico, the paper and the money. After a very long time, the girl came back, bringing the money I was owed and the package of Turkey red calico. I returned to my office, but had time for very little work the rest of the day. When I reached home I gave the package of calico to my wife. She opened it and declared, "Why, this doesn't match the piece I gave you!" "Match it!" I cried. "Oh, no! It doesn't match it. You didn't want that matched. You were mistaken. What you wanted was Turkey red — third counter to the left. I mean, Turkey red is what they use." My wife looked at me in surprise, and then I told her my troubles. "Well," said she, "this Turkey red is much nicer looking than what I had. You've got so much of it that I don't have to use the other at all. I wish I had thought of Turkey red before." "I wish from the bottom of my heart you had," said I.