"Invisible Man." The book is about a nameless black man's search for his identity and place in society.
Ralph Ellison's novel, "Invisible Man", was published in nineteen fifty-two. Ellison was at once called a major new writer. The book won the National Book Award, a high and rare honor for a first novel.
Since then millions of copies have been printed. The book is still used in many universities and other schools. One professor said that he has used the book in his teaching for twenty-five years. He said that each time he returns to "Invisible Man" he finds new ideas in it. Ellison writes in the beginning of his book:
"I am an invisible man ... I am a man of substance, flesh and bone, fiber and liquids – and I might even be said to possess a mind. I am invisible, understand, simply because people refuse to see me...When they approach me they see only my surroundings, themselves, or figments of their imagination – indeed, everything and anything except me."
From the start, "Invisible Man" was a book that changed the way white Americans thought about black Americans. It also changed the way black Americans thought about themselves. And it caused major disputes among both black and white critics.
Black critics said the book was too difficult to read. One black critic said that the black man needed "Invisible Man" like he needed a knife in his back. Another black writer dismissed Ellison because Ellison demanded that writing skills must be learned before political ideas can be expressed.
Some white critics refused to accept a black writer who did not write from direct anger at whites. They seemed to want him not to write from his mind, but from the color of his skin. Yet the book continues to live long after most people have forgotten the disputes.
Ralph Ellison was born in nineteen fourteen, in Oklahoma City, Oklahoma. His father died when Ralph was three. His mother supported herself and her son by cleaning other people's houses.
She also supported her son's interest in music and writing. She would take home old music recordings and magazines from the houses where she worked. Ralph liked jazz, and played trumpet in his high school band. He dreamed of writing serious music.
In nineteen thirty-three, Ralph entered a black university, Tuskegee Institute, in the state of Alabama. He wanted to study music. He moved to New York City in nineteen thirty-six. He still planned to study music and art. However, that same year he ran out of money and could no longer attend school.
The nineteen thirties in America were difficult economic times. There were not many jobs to be found, and even fewer for black men. Ellison worked at many things. He shined people's shoes. He played trumpet in a jazz band. He worked for the Young Men's Christian Association. He worked in factories. He worked for a brief time taking pictures. Lack of money was an important reason for Ralph Ellison becoming a writer. He said:
"I have always read a lot, and I began to realize I had a certain talent for it. It was not easy to be the kind of musician I wanted to be: I did not have enough money to go to Juilliard [school of music]. So I stuck with what I had."
In New York City, Ellison joined the Federal Writers Project. This was a program created during Franklin Roosevelt's presidency to keep writers employed at writing.
He met two important black writers, Langston Hughes and Richard Wright. Wright soon would publish "Native Son," the book that made him famous.
Later, during World War Two, Ellison served as a cook in the United States Merchant Marine. Merchant marine ships carried war supplies to American and allied soldiers. For Ellison, the war was a time of learning and trying to write.
He read books by the American writers T.S. Eliot, Ernest Hemingway, and William Faulkner. And he read books by foreign writers like the Irish writer James Joyce.
Ralph Ellison's stories were first published during World War Two. When the war was over, he visited a friend in the state of Vermont. Ellison said:
"One day I wrote, 'I am an invisible man.' I did not know what those words represented at the start, and I had no thought about what gave me the idea."
The book that started with those words took almost seven years to write.
Like many other novels, Ellison's story is a series of experiences as the storyteller learns to deal with life. Yet, unlike other novels, "Invisible Man" takes place in a dream-like atmosphere in the United States. It is a world where dreams come close to reality, and the real world looks like a frightening dream.
The man telling his story in "Invisible Man" lives in a hidden underground space. But to prove that he exists, at least to himself, he has lit his underground room with one thousand three hundred sixty-nine lights. They remain lit with power he has stolen from the electric company. 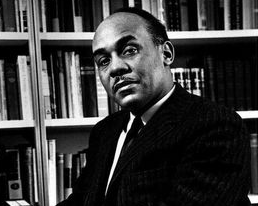 In much of Ellison's novel the person telling the story is a victim, usually of white people, but also of some blacks. He both loves and hates the world. He plans some day to leave his underground shelter. He says that as a man he is willing to believe that "even the invisible victim is responsible for the fate of all."
The man telling the story says that as a boy, white men covered his eyes with a cloth. The white men tell the boy to blindly fight other black boys. The blacks are forced to fight each other to please whites.

At the end of the novel the story has moved from the American South to the North. There are riots in Harlem, the black area of New York City. Instead of ten black children fighting each other blindly, grown black men are battling each other to the death. Blacks still are having their strength turned upon themselves.

Critics said "Invisible Man" was well written. But some critics called this a weakness. They said the writing seemed to hide the book's ideas and make them less a product of black life.

One critic said that he found it difficult to call "Invisible Man" an African-American novel. He said that the main person in the book is a southern black man. But, the critic said, he is all of us, no matter where we were born or the color of our skin.

After "Invisible Man" was published in nineteen fifty-two, Ralph Ellison taught at a number of universities. He retired from New York University in nineteen eighty. While he was alive, he published only two other books. They were books of criticism and essays, called "Shadow and Act" and "Going to the Territory."

Ralph Ellison died in nineteen ninety-four, at the age of eighty. After his death, a book of his stories, "Flying Home," was published. Shortly before his death, Ellison had told someone that his second novel was almost finished. He had worked on the novel for forty years without finishing it.

Parts of the book had appeared in magazines during the nineteen sixties and seventies. Ellison had to rewrite the novel after a large part of it was burned in a fire at his home in nineteen sixty-seven. The novel was said to be two thousand pages long. Finally, his friend John Callahan put the book together after Ellison died. The novel was published in nineteen ninety-nine. It was called "Juneteenth."

Since "Invisible Man" was published, many American writers have said how much Ellison influenced them.

In nineteen ninety, another black writer, Charles Johnson, was given the National Book Award. In receiving the prize, Johnson thanked Ralph Ellison for leading the way for black writers. Ellison was present at the ceremony. He thanked Johnson. Then he expressed his belief that black writers should not be influenced only by other black writers. He said: