In a speech marking the first time a sitting United States President hosted an event at the UN General Assembly focused solely on the topic of religious freedom,
Emphasizing that “America stands with believers in every country who ask only for the freedom to live according to the faith that is within their own hearts,” President Trump highlighted U.S. Secretary of State Mike Pompeo’s plan to create an alliance of like-minded nations devoted to confronting religious persecution, known as the International Religious Freedom Alliance.
He also announced that the United States will dedicate an additional $25 million dollars to protect religious sites and relics, and will form a coalition of U.S. businesses, which will encourage the private sector to protect people of all faiths in the work place.
President Trump deplored the fact that 80 percent of the world’s population today live in countries where religious liberty is threatened, restricted, or banned.
One victim of such religious persecution who testified at the UN General Assembly is Dabrina Bet Tamraz, daughter of Victor Bet Tamraz, an Iranian Christian Pastor who is appealing a ten-year prison sentence. For religious minorities in Iran, their story is not exceptional. 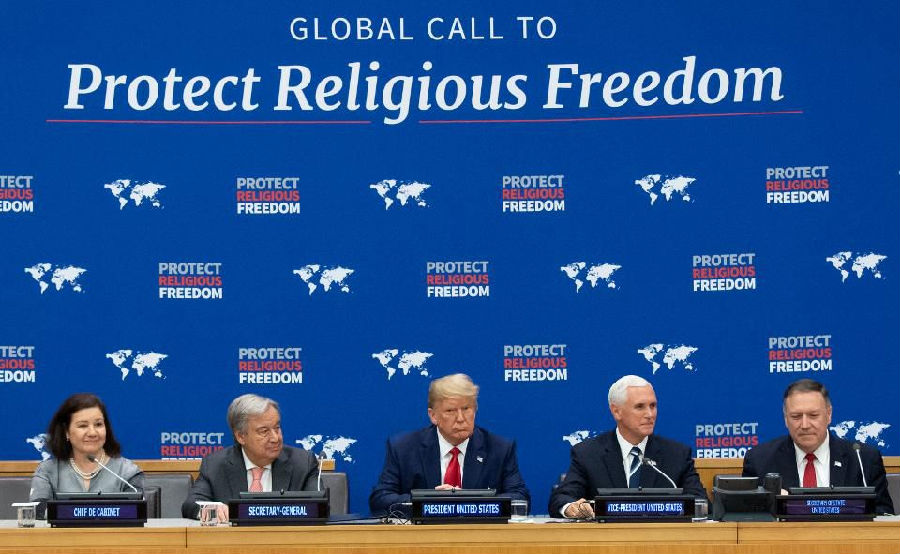 “There are 200 Christians in only the two years that we know of today serving lengthy prison sentences or awaiting their trials…And the Christian persecution, as well as the persecution for Baha’is, Sunni Muslims, Sufis is increasing in Iran. And if you don’t speak about it, if you don’t publicize this news, Iran will do whatever it wants.”
President Trump called making religious freedom a top priority an “urgent moral duty.”
“We ask the governments of the world to honor the eternal rights of every person to follow their conscience, live by their faith, and give glory to God.”
He challenged all nations to “stop the crimes against people of faith. Release prisoners of conscience. Repeal laws restricting freedom of religion and belief. Protect the vulnerable, the defenseless, and the oppressed.”