Protests continue into their second day in Spain's Catalonia region. That's after nine separatist leaders were sentenced to jail by the country's Supreme Court. The jailings came in response to their involvement in a 2017 independence referendum that was deemed illegal by Spain. Lucia Benavides reports.
(SOUNDBITE OF PROTEST)
UNIDENTIFIED PROTESTERS: (Chanting in foreign language).
LUCIA BENAVIDES, BYLINE: Hundreds of pro-independence protesters blocked major railroad lines Monday afternoon by throwing trash and piles of wood onto the tracks then setting it on fire. Those train lines were still damaged Tuesday morning, slowing commutes. Many airlines have already canceled flights in anticipation of protesters heading to Barcelona's airport for a second day of demonstrations.
Student Claudia Cusi was at the airport yesterday, where thousands pressed against police who held them back with batons and rubber bullets.
CLAUDIA CUSI: We just wanted to have a referendum and have the right to vote, and all that happened was that they ended up in jail. 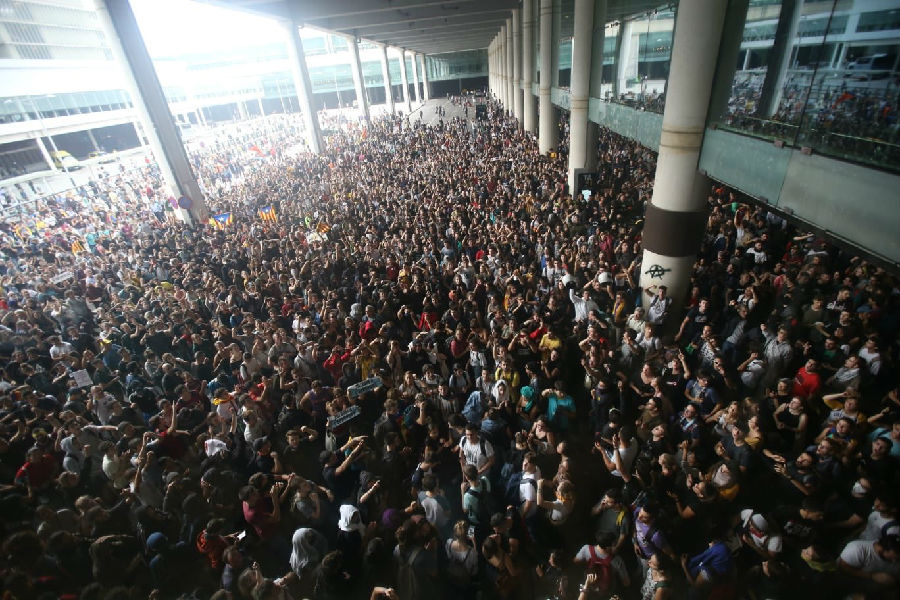 BENAVIDES: She says the separatist leaders should be acquitted of their charges.
In October 2017, the Catalan regional government held an independence referendum with the help of pro-independence grassroots groups. Forty-three percent of voters turned out to cast their ballots despite police efforts to stop them. The "yes" vote won with 90%. Catalonia declared independence, but Madrid quickly dismissed the move and arrested nine of its leaders without bail. Five others went into self-imposed exile.
(SOUNDBITE OF PRESS CONFERENCE)
PRESIDENT QUIM TORRA: Holding a referendum is not a crime. It is not even identified as a crime in the criminal code.
BENAVIDES: Catalan President Quim Torra spoke at a press conference after Monday's verdicts were announced. His government publicly rejected the sentences and asked Madrid for dialogue. Spanish interim Prime Minister Pedro Sánchez, on the other hand, said that dialogue is needed within Catalonia itself.
(SOUNDBITE OF ARCHIVED RECORDING)
PRIME MINISTER PEDRO SANCHEZ PEREZ-CASTEJON: The Catalan government and Parliament must govern for all Catalans, not just the minority. Today's decision confirms the defeat of a movement that failed to gain internal support and international recognition.
BENAVIDES: More protests are planned for the coming days, including a general strike across Catalonia on Friday.
For NPR News, I'm Lucia Benavides in Barcelona.